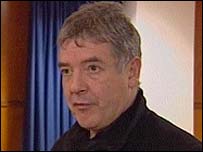 Senior Scottish Socialist Party official Alan McCombes has been jailed for refusing to hand over party documents to the Court of Session. Read the BBC coverage...

The SSP official had been instructed to attend the court and hand over internal minutes of the Scottish Socialist Party at the request of the anti-left paper News of the World.

The courts have no business ordering any socialist organisation to hand over private discussions, especially ones that may not reflect the final view of the organisation but only the discussions that were taking place at that time.

The role of the courts in the Labour movement has always been to the benefit of those who oppose the left and in the favour of the government. Socialists should feel no compulsion to obey the law in such circumstances.

Alan McCombes, one of the founders of the SSP, has been jailed for 12 days for his refusal to comply with the court's outrageous demands. It is to his credit that he has been willing to put his liberty at stake to uphold the confidentiality of the executive council of the SSP

E-Mail your solidarity to the SSP

Alan McCombes, press and policy coordinator of the Scottish Socialist Party made the following statement :

“My decision, which I took with the full support of the SSP, not to hand over the documents demanded by the court was not one taken lightly but in the full understanding of the possible serious consequences that could follow.”

“However I took my stand on the clear position that the Scottish Socialist Party, like all democratic organisations, has the right to hold private discussions on sensitive matters and for those discussions to remain confidential.”

“ Scottish Executive has argued precisely this view on such sensitive matter as the Shirley McKie case, the handling of the scandals around Hepatitis C and many PFI contracts which are paid for by public money”

“We now face the grotesque position that a small party is being pressed by the state to hand over its internal records while the Executive is allowed to keep policy decisions and other matters of vital public interest under lock and key.”

“To comply with the demand to hand over the documents would endanger the right of free debate inside political parties and mean that out rights of free association would be threatened.”

“In such discussions the keeping of records and minutes is a vital part of ensuring that elected officers are accountable to their members and meeting the court’s demand to hand over internal records threatens that right.”

“My legal team Paul Cullen and Fred Tyler presented a powerful case for my position and I pay tribute their skills is so doing and thank them for their work.”

Some of the coverage

Scottish Socialist ‘flouting the law’ over minutes The Herald

SSP rounds on Sheridan as colleagues call on him to drop tabloid ... Sunday Herald