Breaking news - more as it comes in 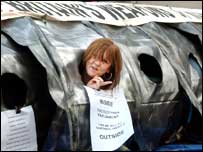 Rosie Kane, Scottish Socialist Party MSP, has been sentenced to 14 days for non-payment of a fine from a anti-nuclear submarine protest outside Parliament last march.

Kane, whose recently lost her mother, May McGarvie, told the press that "I certainly don't want to go to prison but I am prepared mentally and practically for that to happen," she said. "But this is about international law and my conscience makes me protest against nuclear weapons."

She has been taken to HMP Cornton Vale, we don't have a prisoner number yet but cards, letters etc can be sent to: