There is one sure way of proving that Muslims are not the racist cartoon of violent bomb throwing fanatics and that's by burning down embassies and waving placards calling for the beheading of those you hate.

It's the kind of reasoned and proportionate response that is bound to tear down the walls of prejudice and bigotry.

As the crisis over the cartoons of Mohamed continues it's unclear what the total death toll is so far but it has certainly reached double figures and has spilled into the burning of official buildings. Although it should be stated that these demonstrations are small excepting those countries where the government has been complicit in whipping up tension (Syria, Saudi Arabia, Iran, Afghanistan and Libya).

It's clear that there are those on both sides of this issue that seek to inflame and exacerbate the situation. There are cartoons going around internationally, and certainly in this country, of a far more scurrilous nature distributed by Muslims as an evidence of anti-Muslim prejudice - but these cartoons are completely unsourced and their origin is unclear.

Why these people want to heighten tensions and exactly who they are is also unclear. What is clear is that ordinary Muslims, who do not see themselves as extreme or 'fundamentalist' in any way are influenced by this - and that can only be understood in the context of racism, and in particular the heightened racism and prejudices since the September 11th attacks.

The Danish sense of humour 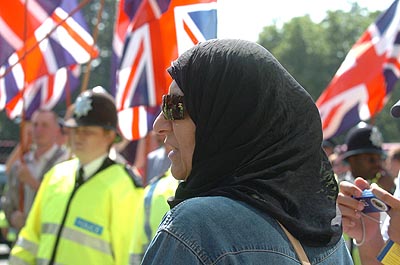 The cartoons of Mohamed with a bomb for a brain, with devil's horns or as a knife wielding maniac are crude anti-Muslim propaganda. It's difficult to see any rational reason for publication in the first place, as Alan Coren said in the Times "the cartoons of the Prophet were so ill-conceived, so ill-drawn and so unfunny."

Stewart Lee - one of the creators of Jerry Springer the opera (reviewed here) observed that "When you satirise something, you need to at least give it the credit of understanding it... They have tried to deal with a subject they don't know enough about, and this is one of the teething problems of the cross-over of cultures in the world...

"In the West, Christianity relinquished the right to be protective of its icons the day Virgin Mary snow globes were put up for sale at the Vatican. But in the Islamic culture it is very different. To use a corporate image, Islam has always been a lot more conscientious about protecting its brand and as a satirist you need to engage with it on its own terms."

More than just being unpleasant though these cartoons are an attack on a section of society that is already having difficulties combating reactionary attitudes, and Western governments that seek to justify repressive legislation and imperialist foreign policy through the demonisation of Muslim people and nations - so these cartoons take on a significance that similar cartoons about, say, Buddhists, would not.

They are not simply making fun of a belief system, as some commentators have claimed, they are attempting to draw a direct link between dark skinned Muslims and terrorism. This is both offensive and inaccurate.

Gary Younge, in the Guardian, said "The right to offend must come with at least one consequent right and one subsequent responsibility. If newspapers have the right to offend then surely their targets have the right to be offended. Moreover, if you are bold enough to knowingly offend a community then you should be bold enough to withstand the consequences, so long as that community expresses displeasure within the law."

Mark Steel, in the Independent, had this to say "a debate about free speech is meaningless unless it relates to the society in which things are being spoken. When Goebbels commissioned cartoons of grotesque paedophile Jews, he was exercising free speech. So if you approach the matter as an abstract debating point, we should defend his right to do so. But that's obviously mad. Similarly, it wouldn't have helped much to advise Jews to draw their own cartoons of grotesque paedophile Nazis, saying 'Then we'll all be laughing at each other, so isn't that lovely.'

"Because speech leads to actions. The reason we no longer accept golliwogs and black and white minstrels and the joke of throwing bananas at black footballers is because their existence effects the status of black people in society. If it's legitimate to portray an entire race as sub-human idiots, they're more likely to be attacked, abused and made to feel utterly dreadful. And yet the debates about the reaction to this Danish cartoon have almost all ignored the position of those who feel most threatened by it."

These cartoons were first published last September but the international furore has only erupted in the last weeks. This not because Denmark is only reachable by month long donkey journeys but the political situation has altered in the intervening time.

When Hamas was elected to government by the Palestinian people Western governments and their newspapers lined up to shake their heads and say you've elected the wrong people and must be punished. Not one of them said to Israel - your policy of assassinations and repression in Palestine are not bringing security but a more ferocious reaction against you and it's time you altered your policies.

Instead the EU decided to threaten the new Hamas government with the withdrawal of millions of pounds of much needed support for some of the poorest people on the planet. It is only in the wake of this disgusting and vicious attack on Palestinian democracy (no matter what reservations people should have about Hamas) that the Middle East became engaged in anti-European demonstrations.

It also comes at a time when the US in particular is ratcheting up tension against Iran. Why is it okay for Western governments to put pressure on the Middle East but not okay for pressure to come from the Muslim world onto the West?

The war in Iraq has heightened tensions rather more than the publication of these cartoons - although there was certainly less official response from Middle Eastern governments over the war than over this issue.

I think there point is worth making about the fact that some of those defending "free speech" and the right of the paper to publish, have also called for the demonstrators with the stupid "behead the cartoonist" type placards in London, to be arrested. What about their right to free speech? I am sure that these placards were intended to offend, but it is not clear whether they were intentionally inciting violence, perhaps they were just being satirical?

Flemming Rose (the culture editor of Jyllands-Posten, which originally published the cartoons) said "We were not treating Islam or the Prophet any differently from how we treat everybody else in Denmark" and has used the idea of simple freedom of speech to justify their actions.

But that's just a lie.

As the Guardian reported (in Danish paper rejects cartoons lampooning Jesus) the right wing Danish paper has a double standard when it comes to freedom of expression and mocking religious ideas. Three years ago they turned down cartoons of Christ, on the grounds that they could be offensive to readers.

In April 2003, Danish illustrator Christoffer Zieler submitted a series of unsolicited cartoons dealing with the resurrection of Christ to Jyllands-Posten. Zieler received an email back from the paper's Sunday editor, Jens Kaiser, which said: "I don't think Jyllands-Posten's readers will enjoy the drawings. As a matter of fact, I think that they will provoke an outcry. Therefore, I will not use them."

Some outcries are more important than others it seems.

Some articles of interest

Seriously, I need to know more about this funny cartoon of the Prophet . . . Alan Coren in the Times

Why Muslims are right to be angry US Socialist Worker

The only democracy in the Middle East Aljazeera