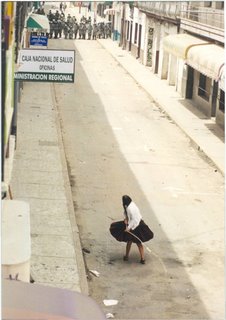 When Evo Morales won the Presidential election in December 2005 it was the culmination of many years of struggle against hard line neo-liberal, racist governments.

The movements that rose up to oppose the privatisation of natural resources were unprecedented, bottom up and so powerful they were capable of taking on the army and overthrowing Presidents.

Morales, or his party MAS, were not the leader of these movements - but he is the most high profile political leader who has a past rooted in working class struggle. Morales explicitly distanced himself from the most miltant protests of 2005 knowing that he was likely to be elected in the near future. However, he understands his relationship with these movements, for instance taking a 50% pay cut when he took office signalling to everyone around the world that he was a politician of principle rather than part of the body of careerist and self inflated politicos who were in politics as much for their ego and personal gain as any cause they wish to further.

Other moves that were as much about signals of intent as they were political acts include the purging of the top brass of the military and the appointment of leading members of the social movements to high office. For example the new Jusice Minister Casimira Rodriguez, who Christian Perentti describes in The Nation as having "started working at age 13 in Cochabamba as a maid. For the mostly white men of the Bolivian bar, this appointment was an insult beyond comprehension... She recounted how she and other maids--some of whom were held as virtual prisoners--used their only free day each week to organize a union for domestic servants. "I have lived with injustice and inequality," said Rodriguez. "It is hard to fight corruption, but I can show the people that this is their house, too."

The main demand of the movements on the new government was the renationalisation of natural resources and one that Morales has begun to address. Making a speech on how Bolivia's resources have been "looted by foreign companies" he announced the highly popular, but limitted, seizure of assetts of the three major gas companies in Bolivia. He has stated that the mining and forestry industries are next and most radically, land reform (which the FT says is a bad thing) 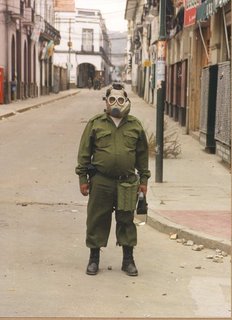 But this is not a government opposed to the market - only the daggers drawn neo-liberal version that was imposed upon the country in the 1990's. Vice President García Linera said that "Transnational corporations are welcome in Bolivia, but they will not dominate the economy. They should expect to pay taxes and submit to reasonable environmental and social regulations. But they will still make profits" and he seems to be true to his word.

Jindal Steel and Power an Indian company has just signed $2.3 billion dollar contracts in Bolivia - the biggest ever contract given to an Indian company in South America. Drugs companies have switched sides to MAS, because the amount of medication Bolivians take (can afford) is currently very low - MAS is the only party likely to make a deep commitment to health care (and thus increase in the drug budget), and the ubiquitous Cuban doctors have already arrived. It seems that many of the multi-nationals feel reassured that Bolivia is a region of economic stability and opportunity.

Solares, leader of COB (the Bolivian version of the TUC) described Evo as "mediocre, incapable, anti-worker and reformist" and proclaimed "scientific socialism and the dictatorship of the proletariat" as the only solution to Bolivia's problems. The FEJUVE (the powerful neighbourhood associations) are not much happier and have equally colourful rhetoric.

Whilst the leaders of the movements still call demonstrations and protests and make declarations the people are certainly giving Morales a chance - the recent call for a general strike and march brought out just 200 people. These radical leaders may need to learn patience but also to read the mood of those they represent, a strike with no support damages the movement far more than no strike at all. I know it's unusual for a UK reader to have to think about a union leader that is for more radical action than the members but this is the situation in Bolivia today.

Nick Buxton, writing in Bolivia, says that despite the progressive reforms "it is still true that the MAS Government have done little to change, or even start to change, the neo-colonial structures of power and wealth that have created such stark inequality in Bolivia. The figures in Government may have changed, but those who control economic power have not. As even Morales admits "we have won the Presidency but not power"."

This Morales effect is an interesting phenomenon. When Blair came to power he got a honeymoon but delivered nothing but neo-liberalism, and the erosion of Labour's support has been slow to say the least - Morales on the other hand may not be contemplating attacking the market system but is delivering real reform that could make a massive difference at the base of society. Just as the left in Bolivia needs to learn at speed a nuanced approach to this phenomenon the left here needs to support the Bolivian movement's demand for deep reforms and the Morales government's attacks on neo-liberalism - and that is not a trick that is easy to master.