Been to see Borat - the movie (or to give it its proper title Borat: Cultural Learnings of America for Make Benefit Glorious Nation of Kazakhstan). Oh man it's good (I'm going to try not to spoil the film for people but will talk about a couple of things that happen so be warned and do not read if you're off to see this) 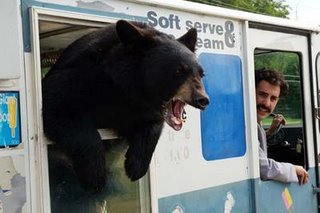 Much of the debate about this movie (and Borat more generally) has been whether he's racist or not, rather than whether he's funny. So I want to start off by saying, whatever your political analysis of this kind of humour, Sacha Baron Cohen is a very gifted man and absolutely hilarious.

OK - now the politics of it. I think there are a couple of key things going on here. One is that Cohen's entire range of characters rely on them being slightly alien - but with an air of familiarity to help create that air of authenticity.

Some people have argued he should have made up a Eastern European country rather than settled on a real one that no one knows anything about. I think this is an extremely odd position to hold. Not only are they advocating that he generalise his 'racism' to make it more acceptable they also miss the point that he needs people to have heard where he's supposedly from as part of the act. Kazakstan performs a specific function in the same way that Staines does for Ali G.

If you're going to walk into a dinner party holding a bag of your own freshly 'made' feces you actually need to be from a different culture if you are going to persuade your hostess to show you how to use the toilet to dispose of the waste and still talk to you like you're a human being. The string of faux pas are forgiven because (some) people are open minded enough to engage with a different way of thinking. Although, admittedly, after hours of this behaviour the cops were called and he was thrown out of the building, staying in character the whole time.

When Kazakstan censored Baron Cohen's website the President's daughter rightly said the site "damaged our image much less than its closure, which was covered by all global news agencies," and "We should not be afraid of humour and we shouldn't try to control everything, I think."

In fact, what Cohen does is both expose the rudeness, racism and homophobia that lies hidden in society, but he also exposes the kindness and willingness to forgive as well. Some people come off really well - like the Judo instructor who consistently and patiently explained why he did not agree with Borat's anti-Semitism without simply walking away in disgust.

Part of the satire is about Western views of the rest of the world but, like Alf Garnet, it can cut both ways. A BNP member could watch Borat and find it just as funny as I do - but I suspect for quite different reasons. When Borat 'accidentally' releases a chicken on a packed New York subway train for me it's hilarious because of craziness and slapstick of it - but I can see it reinforcing bigotry in some.

Actually, there is a very strong progressive message in that scene, before he releases the chicken, where he tries to introduce himself to people. No tricks, just an accent and friendliness to his fellow commuters. He says to one guy "Hello, my name is Borat" who replies "My name is get the fuck out of my face." He's threaten with violence, told to fuck off, and people are generally bastards to him. To expose this he has to be 'foreign' because if he was a New Yorker there's nothing to explain why he's acting outside the norm.

In one hilarious moment he tries to introduce himself to a guy in the street who just flees from him! Borat then gives pursuit shouting "I just want say Hello, my name is Borat" and what seems like an extensive chase occurs. I love NY but never fucking talk to me?

I think the film is in many ways funnier than the TV series, although the strongest political points are on the small screen. There is a very uncomfortable scene where 'Borat' finds lodging for the night and asks his hosts "why are there picture of Jew on the wall." To which the landlady replies "Well, I painted them and I'm Jewish"

The expression on Borat's face is achingly funny and the scenes that follow are utterly hilarious - but incredibly dodgy. I am a 100% fan of Cohen but cannot think of a single redeeming feature of these scenes apart from the fact that they are really, really funny. It just does not compare to the infamous TV moment where Borat gets a bar full of red necks to sing along with his traditional Kazaki folk song "Throw the Jew down the well."

Part of this shift is I think because there are far more scripted moments, in "Kazakstan", in discussion with his editor, when they rent a bear, etc. These scenes are useful for the film - to help it tick along - and the sad part in the middle is absolute genius, but the powerful progressive politics that lie behind Borat are weakened for it.

I also have no idea how Cohen managed to stay out of jail - particularly in the scenes with a completely oblivious Pamela Anderson who surely must have been afraid for her life. Was she in on the joke? I don't think so, as this press clipping indicates (this is not in the film)

Sacha Baron Cohen was dunked in the sea by Pamela Anderson's bodyguards after rugby-tackling the actress at her dogs' wedding. The 'Ali G' star was dressed as his other creation, cringe-inducing Kazakhstani TV journalist Borat, when he pulled the stunt.

Cohen (33) in trunks, leather jacket and Village People-style cap, emerged from the surf on an inflatable turtle.
His rugby tackle sent Pammie (38) hurtling to the sand on the beach at Malibu, California. Concerned security men grabbed the comedian and dragged him into the sea.

Pam was presiding over the nuptials of her golden retriever Star to chihuahua Luca."

You should definitely see this film, and I'd be interested to hear what you think. The comedy is indeed "cringe-inducing" and the politics of this technique worth discussing - whilst I'm sure we all agree the intention is progressive, and I come down on its side, I also recognise it's a double edged sword with some serious problems as well as the obvious benefits.