Big Brother 7: the franchise that keeps on giving 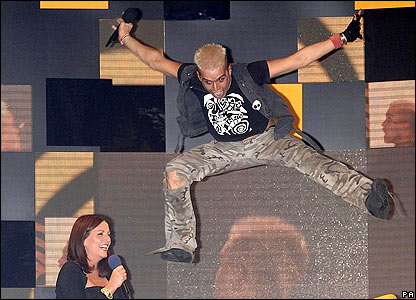 At last its over, the seventh, and longest running, Big Brother. A series characterised by more devious plot twists, more contestants and controversy than ever.

Big Brother 7 included a vast range of daily spin off shows examining in minute detail every aspect of the contestants and offering an unprecedented level of interaction with the audience.

The scale of the show is incredible with around 7.7 million watching the final (which is similar to last year's non-celebrity version of 7.8 million, down on 2004 where nine million watched the final, and far down on the record viewing figures for the third series) far outstripping any other Channel Four show.

The show is very big business, for example, last year Endemol made more than £100 million from Big Brother and Nestle's successful "golden ticket campaign" generated a massive increase in sales of those who hoped to win a place in the Big Brother house.

But by far the biggest issue around the show is that the welfare of contestants comes a very poor second to the health of the income the show generates.

A significant proportion of the contestants on this year's show have serious mental health or emotional problems. Whilst the show's producers say that there is extensive testing to ensure all those taking part are fit to do so these claims look rather thin when we look at the facts.

One contestant, Shahbaz, who was subjected to racist comments by fellow housemates, threatened suicide on day six of the show stating "I am a dead man walking. This is my last curtain call. I came here to die on this programme - I am going to prove it" and was reluctantly allowed to leave (he was not thrown out even after this).

Recovering anorexic Nikki has a long history of mental illness, Aisleyne has been through the mill (The Mirror), and Lea apparently suffers from body dysmorphic disorder, a condition in which the sufferer becomes preoccupied with a non-existent or minimal cosmetic defect, and her obsession with her surgically-enhanced breasts was said to be the symptom of mental illness.

Pete, the eventual winner, admitted during the final that last year he had had a mental break down "I was completely, absolutely at the end of my tether in life, and all that. I had a huge visit from my mate in heaven. He came down and he showed me a huge spiral" and then claiming that Big Brother had "saved my life."

As a sufferer from Tourettes Pete could react badly to stressful situations - as was demonstrated when it was announced that he won the show and set about destroying the house. Fun to watch, but actually directly related to his condition - this doesn't mean that he was the victim of some sort of freak show and his appearance on the show has had many positive effects for sufferers of Tourettes, but as part of the overall picture it must raise concerns about Endemol's priorities.

Dawn, who was ejected for alleged cheating said that "The issues that come from BB such as mental health exploitation, bullying and racism have to be taken seriously by those in power to do something about it. And if the BBC could get rid of Little and Large with 24 race complaints, what's Channel 4 doing storing over 1,000 race complaints about Big Brother." 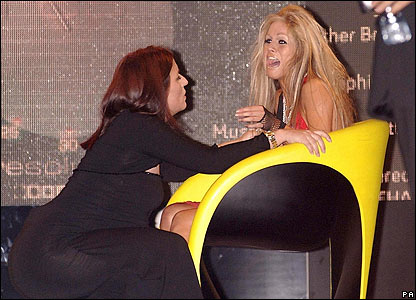 "People who want fame are often insecure and very unstable," said Dr McVey, who advised the BBC on Castaway... "If you put people under stress and they are emotionally vulnerable, then their vulnerabilities will come to the fore. There is a real potential for disaster and very vulnerable people should be filtered out in the selection process." From the Telegraph

These concerns are directly related to the profits Endemol hopes to generate through the show. It believes (perhaps correctly) that sex, conflict, anti-social behaviour and 'controversial' figures (like pre-op transexual Sam) are the way to avoid a boring show where everyone gets on and has interesting conversations.

Endemol's concerns for their contestant's welfare extends only so far as it effects their ratings. A large amount of criticism of the show over abuse or unethical behaviour is to be avoided because it might tarnish the brand, but the largest amount of criticism the show came in for was the attempt to generate extra profits by introducing a vote to bring back contestants that viewers had already spent money on voting out the show.

These criticisms meant that all of the money raised from that weeks vote went to charity, which shows that the company can be quick to respond to criticism - but it will never ditch the idea of exploiting people's misery until we switch off the TV and do something more interesting instead.

A few of our previous Big Brother articles

Why we watch Big Brother